The need for Efficiency

Total knee arthroplasty (TKA) is well established as a clinically successful and cost-effective procedure for alleviating pain, restoring function and enabling a higher quality of life for patients with advanced osteoarthritis. These positive outcomes have driven significant growth in the number of TKA procedures performed globally. In the United States alone, the number of procedures is projected to increase from 693,400 cases in 2010 to 3.5 million cases by 20301,2. At an average hospital cost of $16,000 per case, knee arthroplasties in the U.S. exceeded $11 billion in 20101.

As a response to escalating costs, the U.S. healthcare system is evolving from a fee-for-service system to a value-based system that incentivizes quality care delivered under controlled costs. For total joint replacement, CMS is currently trialing the Comprehensive Care for Joint Replacement (CJR) model, which holds hospitals financially accountable for the quality and global cost of care from patient admission through 90 days post-discharge. With these changes in reimbursement, providers must evaluate all aspects of TKA procedures to ensure financial viability while delivering high quality care. In turn, there is a strong focus on controlling operating costs, minimizing post-discharge complications, and optimizing the utilization and scheduling of operating rooms.

Streamlining the surgical instrumentation is a key area for improving efficiency in the OR as well as hospital operations, particularly for outpatient TKA and ambulatory surgery centers. Single-use, sterile-packed instrumentation can help control costs while improving quality and efficiency. Multiple studies have suggested that reusable instrumentation may be associated with surgical site infections, which could be avoided with single-use instruments3-5. Single-use instruments also means fewer trays that need to be sterilized for each case, translating to substantial cost reductions and logistical improvements. OR setup and cleanup time is also reduced during case turnover5, which is an important focus for improving hospital efficiencies and OR utilization. Finally, reusable instrument sets for TKA are typically loaned to the facility by a manufacturer and the logistics associated with managing the intake, processing, and transport can be highly burdensome.

The GMK® Efficiency single-use Instruments from Medacta International of Castel San Pietro, Switzerland, come terminally sterile and can streamline the instrumentation logistics and OR turnover for each TKA case, as all of the opened Efficiency instruments and trays are disposed of at the end of the case (Figure 1A). The durability and functionality of these instruments was attained through attention to design detail and the combination of special medical grade composite technopolymers with high precision manufacturing processes. These instruments can be used in combination with reusable or patient-specific cutting blocks, such as MyKnee® Patient Matched Instrumentation.

Costs and logistical considerations of TKA vary dramatically between different facilities, surgeons, and cases, so it is difficult to study the economic advantages of single-use instruments directly. Cost modeling through probabilistic simulations provides insights into the range of potential savings under a wide variety of scenarios. A cost model was developed to explore the potential cost savings for TKA procedures performed with GMK Efficiency instruments compared with traditional, reusable instruments based on a variety of clinical events (e.g. infections), economic conditions (e.g. staff wages) and logistical variables (e.g. OR turnover). 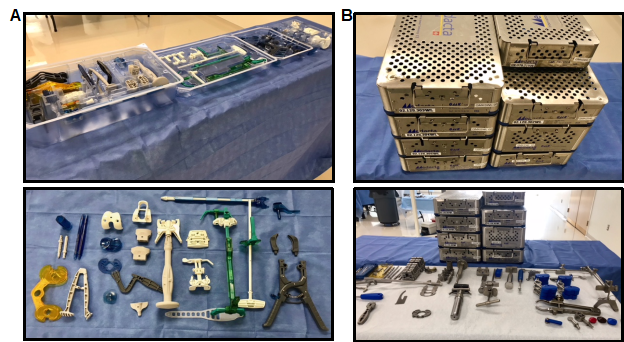 Four variables were identified that could be affected by the use of traditional, reusable instruments vs. single-use Efficiency instruments for a TKA case:

These variables were subdivided into a resource variable (e.g. number of trays to sterilize per case) and a unit cost variable (e.g. cost of sterilizing one tray). A total of 200 sites (e.g. hospitals) and 500 cases per site were simulated (100,000 total cases) using the Monte Carlo technique, where values of each variable are picked from probability distributions to represent each unique case. In this study, some of the variables were only changed at the site level (e.g. cost of sterilizing one tray) so that they would be fixed across the 500 cases performed at that site. The rest of the variables were allowed to change on a case-by- case basis (e.g. number of trays used in each TKA case). The probability distributions were constructed for each of the model variables based on data from published clinical studies or estimates from expert panels, with different values for Efficiency vs. reusable instruments (Table 1). Costs were adjusted for inflation to 2018 U.S. dollars based on the U.S. medical care Consumer Price Index (CPI).

Modeling Efficiency in OR turnover

A second modeling technique examined the effect of OR turnover time on under- and over-utilization of the OR. Single-room OR blocking was assumed where a surgeon and the support team would be allotted the space for a full 8-, 10- or 12-hour day. Cases were assumed to be scheduled back-to-back with 2 hours allotted for each case, based on a mean turnover time of 38 minutes and mean procedure time of 79 minutes6. For example, an 8-hour OR block had 4 cases scheduled each day. The same Monte Carlo technique was used to determine the length of each procedure and turnover time for each simulated case. If the scheduled cases for the day finished with at least 2 hours to spare, an additional case could have been completed that day. If the scheduled cases took longer than the allotted time for the OR over the course of the full day, the extra time was considered as staff overtime. 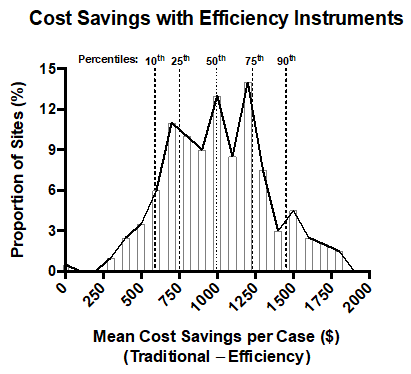 Based on this model, switching from reusable to Efficiency instruments translated to a mean cost savings of $1,003 per case. Approximately 75 percent of simulated healthcare providers saved at least $750 per case, 50 percent saved at least $1,000 per case, and 25 percent saved over $1,200 per case. The smallest cost savings observed by a provider was $4.50 per case and the largest was $1,829 per case (Figure 2). Reductions in tray sterilization and loaner set management were the largest drivers for cost savings.On average, the sites that saved the most by switching to Efficiency instruments had significantly higher personnel costs for tray sterilization and tray management compared to the sites saving the least. The cost of OR time, the total OR turnover time, the average number of trays used per case, and the tray management time were not significantly different between the sites saving the most and the least. Also, changing the assumption of a 40 percent reduction in infection rates to a 20 percent reduction with Efficiency instruments did not significantly affect cost savings due to the low rates of perioperative infections in TKA.

In a single-site clinical study, Siegel et al. reported cost savings of $480 to $600 with single-use instruments vs. reusable instruments for TKA, based on measurements of the resource requirements and costs associated with OR turnover and tray sterilization5. They also reported significantly fewer infections with single-use instruments (0.2 percent vs. 3 percent; p=0.006). In close agreement with those results, this modeling study estimated a median cost savings of $522 based on OR turnover and tray sterilization alone. Other studies have emphasized the importance of case turnover in the OR for optimizing productivity and achieving increased case numbers. Through interdisciplinary workflows, Cendan and Good reported reductions in turnover time of 16 minutes, which translated to an additional 0.5 cases per day on average7. This finding is also consistent with the modeling results, which demonstrated that an additional case could be scheduled on 51 percent of 12-hour operating days when using Efficiency instruments.

Tray sterilization and tray management were the primary areas for cost savings. Studies of single-use instrumentation and patient-specific instrumentation consistently conclude that 4 to 12 fewer trays need to be sterilized compared to traditional, reusable instruments. However, the costs reported in the literature of sterilizing one tray are highly variable (range: $31 to $100 per tray), which can result from operational and staff wage differences between sites. This modeling study suggests that these large variations could substantially impact the potential for cost savings with single-use instruments. The simulated sites that saved the most had tray sterilization costs and staff wages 2 to 3 times greater than those of sites saving the least.

Additionally, during the development of the GMK Efficiency platform, Medacta considered the environmental impact of the disposable product's life cycle; from manufacture, to usage, to disposal. An analysis was carried out by SwissClimate, an independent organization focused on assisting companies in setting up holistic climate strategies and sustainable concepts. Their findings demonstrated the environmental impact of GMK Efficiency is neutral, when compared to the average CO2 equivalent annual emission of a hospital using conventional metal re-usable instrumentation.8

GMK Efficiency Single-use instruments can facilitate time and cost savings while bringing greater reliability and predictability to multiple steps in the global delivery of TKA. This modeling study demonstrated that the majority of healthcare providers could realize substantial cost savings, improve OR utilization, and bring predictability to budgeting through less variance in the operating costs. Of the 200 simulated sites, 95 percent saved at least $500 per case and 50 percent saved at least $1,000 per case. Based on an estimated 700,000 TKA cases per year2, an average cost savings of $1,003 per case, and a cost of $500 per single-use instrument set, the U.S. healthcare system could realize an annual savings exceeding $350 million with single-use instruments. Efficiency instruments also dramatically reduced overtime in the OR, enabled the opportunity for an increase in the number of daily cases, and may reduce the risk of surgical site infections. Overall, this modeling study suggests that GMK Efficiency Single-use instruments have a compelling potential to help improve the quality and efficiency of delivering TKA procedures.