Throughout 2017 there were numerous changes in the healthcare industry, with large events such as the inauguration of a new president and significant shift in political control and Hurricanes Harvey and Irma impacting the industry.

As it relates to ambulatory surgery centers (“ASCs”), there were a few trends to note: continued consolidation, changes to reimbursement, continued migration of higher acuity procedures to the ambulatory setting, and approval of additional Current Procedural Terminology (“CPT”) codes permitted in ASCs.

In 2017, there were a number of transactions announced involving large, national operators. This continued trend of consolidation in the market mirrored the healthcare industry at large, and is summarized in the chart on the following page. Notable, large transactions in 2017 included:

Throughout 2017, there was a notable increase in competition for the acquisition of both single site facilities and more platform level ASC businesses. Private equity companies picked up their acquisition activity adding to the already present competition between health systems/hospitals and management companies. Some private equity company strategies differentiate themselves from those of ASC management companies in that they pursue the acquisition of both physician practice and related ancillary services (such as ASCs).

Currently, the largest operators (in terms of number of ASCs) are AmSurg Corporation (“AMSURG”), United Surgical Partners International (“USPI”), and SCA, with approximately 263, 244, and 200 ASCs, respectively, as of a current date. As noted in the chart below, the number of total centers under partnership by a national operator, as a percentage of total Medicare certified centers, continues to grow from approximately 25.7% in 2011 to 28.7% in 2017. Additionally, of the top 6 management companies, they have increased their centers under management by approximately 335 centers since 2011, which represents a compound annual growth rate of 6.3%. As the management companies have increased in size, they have been able to provide a greater level of strategic value such as higher reimbursement contracts, better management, improved supply contracts, etc. As a result, there has been a growing delta between the multiples paid for an ASC as measured by trailing twelve month results and the effective, go-forward multiple of the center, once acquired, due to these accretive opportunities for performance enhancement.

On November 1, 2016, the Medicare reimbursement for ASCs in 2017 was finalized by the Centers for Medicare & Medicaid Services (“CMS”). CMS published the 2017 ASC payment final rule, which resulted in overall expected growth in payments equal to 1.9%. This payment rule is based on the Consumer Price Index for All Urban Consumers (“CPI-U”) update determined to be 2.2%, and the multifactor productivity (MFP) adjustment to be 0.3%, resulting in an MFP-adjusted CPI-U update factor of 1.9% for CY 2017. Moreover, the ASC payment final rule for CY 2018 was released by CMS on November 1, 2017, and the rate will increase by 1.2% in CY 2018. The ASC payment rate is calculated based on a 1.7% CPI-U adjustment less the MFP reduction of 0.5%.

In addition to annual changes to reimbursement, CMS implemented 10 new CPT codes in CY 2017 to the Hospital Outpatient Prospective Payment System (“OPPS”) and ASC Payment System final rule. All of the new codes are add-ons, meaning the codes will not be reimbursed additionally. The codes that were added for CY 2017 are summarized in the table below. Furthermore, on November 1, 2017, CMS released the 2018 OPPS and ASC Payment System final rulings, which included three new CPT codes, which also are summarized in the chart below. 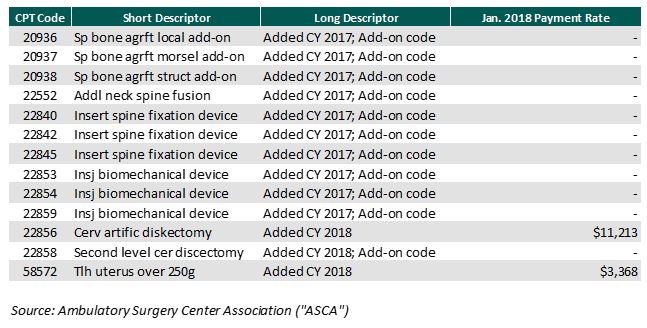 In conclusion, the major trends that were realized in 2017 include the addition of CPT codes permitted by CMS in ASCs, the increase to reimbursement, and the further consolidation in the ASC industry. If the developments realized in 2017 continue into 2018, we expect to see further consolidation in the market and higher acuity volume being pushed into ASCs from the inpatient setting.