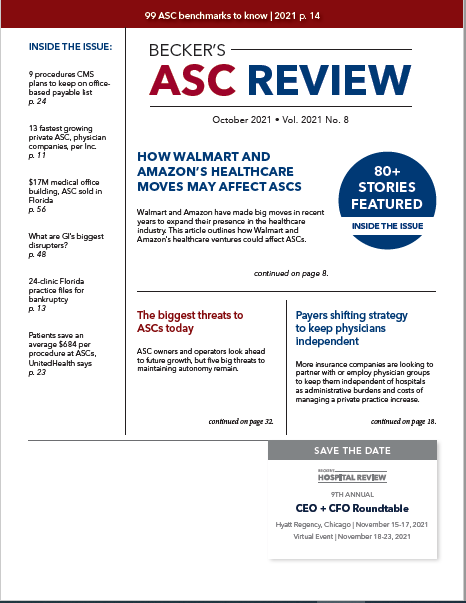 99 ASC benchmarks to know | 2021
Here are 99 operations, finance and quality benchmarks in ASCs gathered from several sources across the industry.

Payers shifting strategy to keep physicians independent
Blue Cross Blue Shield of Michigan added a physician management services business to its portfolio in early August, following a trend of insurance companies seeking to partner with or employ physician groups to keep them independent of hospitals.

Patients save an average $684 per procedure at ASCs, UnitedHealth says
Shifting routine outpatient procedures to ASCs can save commercially insured patients $684 on average per procedure, according to a Sept. 8 report from UnitedHealth Group.

Payers shifting strategy to keep physicians independent
Blue Cross Blue Shield of Michigan added a physician management services business to its portfolio in early August, following a trend of insurance companies seeking to partner with or employ physician groups to keep them independent of hospitals.

What happened when an insurer rescinded surgery approval after the case started
Anthony Romeo, MD, executive vice president of the Musculoskeletal Institute of DuPage Medical Group in Downers Grove, Ill., was ready to perform orthopedic surgery on a sedated patient earlier this summer when his office received a surprising call.

4 anesthesia industry updates
An Illinois hospital had to postpone elective surgeries for almost three weeks because of a lack of anesthesia providers.

'This is a time for ASCs to thrive,' surgeon says on the looming physician shortage
More than 2 of 5 active physicians will be older than 65 in the next decade, but one surgeon said he thinks this could be a benefit for practicing physicians.

ASCs are a hot ticket for buyers, but there's a dark side
The value ASCs bring to the healthcare system is undeniable, and buyers are watching.

The biggest disrupter of the ASC industry? Patients, CEO says
ASCs can benefit from the new "shopping" era of healthcare, according to Andre Blom, CEO of Des Plaines-based Illinois Bone & Joint Institute.

New York orthopedists indicted in $31M 'trip-and-fall' scheme that preyed on poor
A group of physicians and lawyers were indicted this week, accused of recruiting a network of people for a slip-and-fall scheme that defrauded New York City businesses and insurance companies of more than $31 million.

Orthopedic surgeon base pay fell 13% in 2020-21
The base salary for orthopedic surgeons dropped 13 percent in the past year, according to the Merritt Hawkins 2021 Review of Physician and Advanced Practitioner Recruiting Incentives, released Aug. 9.

What's worrying spine surgeons?
The spread of the coronavirus' delta variant, increasing prior authorization requirements are among the biggest concerns for spine surgeons in the coming months.

Spine surgeon side gigs: Expert witness, venture capitalist & more
Many physicians take on nonmedical sige gigs, with real estate, investing and consultant opportunities being the three most common areas physicians are drawn to.

44% of women in GI experience difficulty finding a mentor: 4 stats to know
Women comprise only 18 percent of practicing U.S. gastroenterologists, and a new survey found that many have a hard time finding mentors.

5 fast facts on Gastro Health's CEO
Joseph Garcia has been the CEO of Miami-based Gastro Health since February 2018.

9 ASC acquisitions in August
A roundup of ASC purchases making news this month:

Physician admits to stealing more than $500K from New Jersey practice
Walter Sytnik, DO, of Voorhees, N.J., admitted Sept. 9 to defrauding his former employer, an unnamed New Jersey medical practice, to the tune of more than $500,000. Dr. Voorhees stole checks from the practice and used them to pay personal expenses.