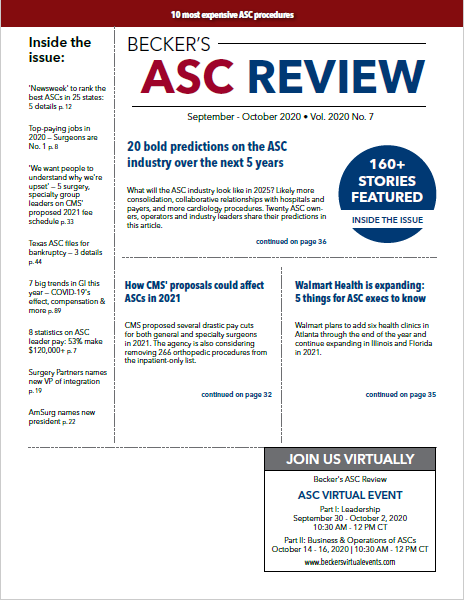 How CMS' proposals could affect ASCs in 2021
CMS released its proposals for 2021 in early August, which made several drastic cuts to payment rates for both general and specialty surgeons.

Walmart Health is expanding: 5 things for ASC execs to know
Walmart continues to grow in the healthcare space.

'Newsweek' to rank the best ASCs in 25 states: 5 details
Newsweek is partnering with global research firm Statista to rank the country's best ASCs.

Top-paying jobs in 2020 — Surgeons are No. 1
Healthcare dominates the list of best-paying occupations in 2020, according to a CEOWorld Magazine ranking.

'We want people to understand why we're upset' — 5 surgery, specialty group leaders on CMS' proposed 2021 fee schedule
CMS released its Medicare Physician Fee Schedule proposed rule for 2021 Aug. 3, which could result in drastic cuts for surgeons across the board.

7 big trends in GI this year — COVID-19's effect, compensation & more
With the dog days of summer in the rear view, gastroenterology has had a specialty-changing year severely affected by the COVID-19 pandemic, but the specialty is gradually recovering and moving forward. Here are seven trends that will shape the specialty going forward:

AmSurg taps cardiology leader as next president — 3 details
Jeff Snodgrass will be the new president of AmSurg, one of the country's largest ASC operators and the ambulatory division of Nashville, Tenn.-based Envision Healthcare.

Hospital founder to serve 66 months in prison, pay $82.9M over fraud scheme
An anesthesiologist was sentenced to more than five years in federal prison after pleading guilty to involvement in a $200 million fraud scheme at Dallas-based Forest Park Medical Center, a now-defunct physician-owned hospital for bariatric and spinal patients, according to the Department of Justice.

How CMS' proposals could affect ASCs in 2021
CMS released its proposals for 2021 in early August, which made several drastic cuts to payment rates for both general and specialty surgeons.

'We want people to understand why we're upset' — 5 surgery, specialty group leaders on CMS' proposed 2021 fee schedule
CMS released its Medicare Physician Fee Schedule proposed rule for 2021 Aug. 3, which could result in drastic cuts for surgeons across the board.

7 financial management tips to help ASCs capitalize on a rebounding ASC market
In mid-March, hospitals across the country halted elective surgeries due to the SARS-CoV-2 pandemic. While many ASCs did experience initial shock—volume across the nation dropped 80% between February and April—most ASCs have now rebounded to pre-pandemic activity.

USPI vs. AmSurg vs. SCA: 8 key comparisons
United Surgical Partners International, AmSurg and Surgical Care Affiliates are among the longest-lasting and largest ASC chains in the U.S.

Hybrid ASC is up and running with 43 cardiac partners: 6 things to know
After acquiring an ASC earlier this year, US Cardio Partners equipped it with a catheterization lab. The hybrid facility is now open to patients, CEO Cliff Crossett said in a phone interview with Becker's ASC Review.

$368M+ in undisclosed spine journal industry contributions found in study; researchers want transparency
Researchers from the University of Pittsburgh Medical Center are advocating for more transparency from spine journal authors after finding more than $368 million in undisclosed industry contributions in a recent study, according to News-Medical.

6 billionaire doctors in the US have a combined net worth of $25.3B
Six physicians are currently on the Forbes Billionaires list.

10 GI groups growing in 2020
Ten gastroenterology groups with plans to grow their footprint, workforce or services in 2020:

Physicians see overall pay boost, but GI compensation falls most among any specialty
While physician compensation increased in general from 2018-19, increases in compensation per work relative value unit weren't as pronounced as other years, according to AMGA's 33rd "2020 Medical Group Compensation and Productivity Survey."

Anthem: Shifting certain GI procedures to ASCs could create $12B in savings
Colonoscopies and upper gastrointestinal procedures cost an average of 1.7 times more in a hospital outpatient department than they cost in an ASC, according to a July report from Anthem's Public Policy Institute.

AGA recommends pivot from colonoscopy-only testing
A team of 60 gastroenterology experts recommended gastroenterologists move on from a "one-size-fits-all" approach to colorectal cancer screening, in a new preprint study published in Clinical Gastroenterology and Hepatology.