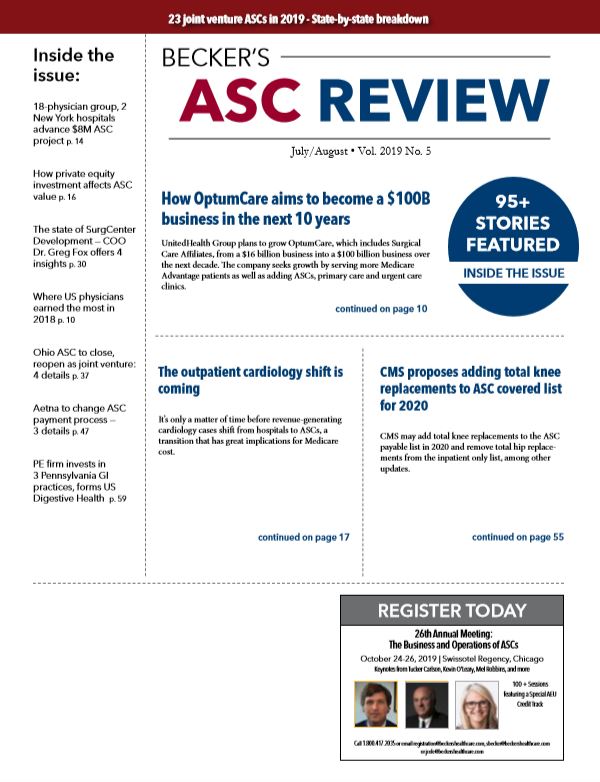 Where US physicians earned the most in 2018
Total compensation among providers has risen at a rate of 7 percent to 11 percent in the last five years, according to a report from the Medical Group Management Association.

Ohio ASC to close, reopen as joint venture: 4 details
Sandusky, Ohio-based Firelands Regional Medical Center will close its ASC in June and reopen it in collaboration with NOMS Healthcare and Fisher-Titus Medical Center in Norwalk, Ohio, according to the Norwalk Reflector.

Aetna to change ASC payment process — 3 details
Aetna is changing how it will handle certain ASC and ambulatory payment classification code edits, according to AdvantEdge, a medical billing company.

The outpatient cardiology shift is coming
It's only a matter of time before revenue-generating cardiology cases shift from hospitals to ASCs, a transition that has great implications for Medicare costs, according to Ronald Hirsch, MD, who wrote an analysis on the matter for the Healthcare Financial Management Association.

USPI sells 2 ASCs, reports revenue per case up 3% in Q1
Tenet reported its ambulatory care segment revenue dropped 3.6 percent in the first quarter year over year, largely due to the sale of Aspen Healthcare in 2018.

CHI Franciscan to divest ASC, pay $2.5M to settle lawsuit: 5 things to know
Tacoma, Wash.-based CHI Franciscan agreed to settle a federal antitrust lawsuit related to the acquisition of an orthopedic practice and affiliation with a separate multispecialty physician group that the state's Attorney General deemed anticompetitive, according to the Washington State Attorney General's Office.

Which states pay GIs the most?
The average annual pay for a gastroenterologist practicing in the U.S. is $347,500, according to jobseeker website ZipRecruiter.

The statistics to know about ASC revenue, out-of-network billing strategy & risk
Out-of-network strategies can affect ASC value, according to the 2019 ASC Valuation Survey by HealthCare Appraisers.

The deal days of summer — Edgemont's Luke Mitchell on the past, present & future of GI PE investment
At the halfway point of the year, private equity investment is still making inroads into gastroenterology. But summer is heating up and with it could come a swell of investment, if momentum continues as planned.

The 10 best, worst states for health system performance
A report from the Commonwealth Fund outlined which states have the best and the worst performing health systems, basing their rankings on health outcomes, health disparities, access and quality of care.

2nd cyberattack at Maryland surgery center affects more than 2,000 patients
Palisades Eye Surgery Center in Bethesda, Md., was hit by a data breach, according to the HHS Office for Civil Rights.

Pennsylvania's $12.5M tax on ASCs could cause dozens to close, lawmaker says — 5 key points
A proposed tax on Pennsylvania ASCs would hurt patients and the practices themselves, according to Pennsylvania state Rep. Greg Rothman, R-Cumberland, who wrote an op-ed to Central Penn Business Journal.

The top, bottom 5 states for RN pay
The average pay for a registered nurse in the U.S. is $68,553, according to a report from job seeker website ZipRecruiter.

Avoid unnecessary rework and expenses by improving the patient registration processes: 5 steps for front-desk staff
With the continued shift of financial liability from the third-party payers to patients, it is critical to have effective, efficient and consistent processes and procedures for patient registration and intake.

Surgery Partners CFO: 5 keys for the future — payer partnerships, future acquisitions & more
Surgery Partners spent much of 2018 shifting strategy to focus on its ambulatory surgery center business instead of its ancillary business, after CEO Wayne DeVeydt came on board in January 2018.

Why ASCs will succeed in value-based care + more insights from a Florida ASC administrator
Consolidation, cost cutting, and efforts to improve efficiency and quality will transform the ASC space within the next 10 years, according to Kerri J. Gantt, administrative director of Gastroenterology Associates of S.W. Florida, a practice based in Fort Myers and Cape Coral.

The ASC payer landscape: 4 Qs with Administrator Chris Markford
Chris Markford, administrator of the Orthopaedic Surgery Center of Clearwater (Fla.), shared his thoughts on the top reimbursement trends in the ASC industry.

The changing bundled payment landscape for ASCs — What to know about risk, payers & future trends
The shift to value-based care and the movement away from fee-for-service payments has spurred growth in the adoption of bundled payment models. CMS and private insurers are focusing on reducing costs while maintaining care quality, paving the way for bundled payment adoption in the healthcare system.

5 interesting ASC company partnerships to know
The ASC industry is expanding in new directions, especially focused on orthopedics and gastroenterology.

Aetna to change ASC payment process — 3 details
Aetna is changing how it will handle certain ASC and ambulatory payment classification code edits, according to AdvantEdge, a medical billing company.

How the anterior hip replacement approach fuels outpatient surgery
Joel Matta, MD, pioneered the anterior approach for total hip replacement in the United States in 1996, is an orthopedic surgeon specializing in hip disorders at The Steadman Clinic in Vail, Colo., and the co-founder and chairman of the Anterior Hip Foundation.

Orthopedics in ASCs: The key trends to drive success in 2019 & beyond
Michael Redler, MD, is a founding partner of The Orthopaedic and Sports Medicine Center in Trumbull, Conn.

CMS boosts RVUs for 41 spine procedure codes
CMS retroactively updated the Professional Liability Insurance Relative Value Units for several Medicare procedures, which will have a positive impact on spine surgeons, according to an announcement from the International Society for the Advancement of Spine Surgery.

SurgCenter building orthopedic ASC, its 5th Michigan facility — 3 details
Alliance Surgery Center will be SurgCenter Development's fifth location in Michigan when construction wraps up in November, according to UpNorthLive.

Louisiana Spine & Sports physician sentenced to 37 months in prison for Medicare fraud, to pay $254,962
A Louisiana-based pain physician who pleaded guilty to committing Medicare fraud was sentenced to prison and ordered to pay hundreds of thousands of dollars in restitution.

The next 5 years in spine: 5 surgeons on technology to watch
Five spine surgeons discuss where they expect technology to evolve over the next half-decade.

Medtronic cuts senior position amid restructuring
Medtronic's senior director of corporate communications left the company because his position was eliminated, the StarTribune reports.

To screen or not to screen? 45 is the question
Two gastroenterologists debated the virtues of universally screening patients for colorectal cancer at age 45, per the American Cancer Society's guidelines, Medpage Today reports

The ASC management strategy that will likely lead to failure — 3 expert insights
Successful ASC leadership requires flexibility, responsiveness and talent retention, according to Greg Zoch, partner at Kaye/Bassman International and managing director of the ambulatory surgery and surgical hospital practice.

These specialty physicians have the highest net worth
Gastroenterologists top the list of physicians with a net worth over $5 million, according to a report from Medscape

4 things to know about ophthalmologist workload
Reimbursement, rules and regulations are some of the top challenges faced by ophthalmologists in 2019, according to Medscape.

Cardiologists warned UNC Children’s of heart program issues
Cardiologists at UNC Children's Hospital in Chapel Hill expressed serious concerns about the safety and quality of the hospital's pediatric heart surgery program in 2016, after noticing an uptick in surgical complications and deaths, according to a 7,000-word investigative report from The New York Times.

5 biggest GI trends in 2019 — Private equity, salaries, cancer rates & more
As the dog days of summer inch ever closer, here are some of the biggest stories and trends that have defined gastroenterology through the first half 2019.

Massachusetts hospital to close in 2020
Union Hospital in Lynn, Mass., will close by May 2020, about eight months later than its expected closure in October 2019, according to CBS Boston.

Why MBA programs are shutting down
A strong job market is suppressing demand for master's in business administration degrees, leading many universities to shutter their in-person programs in favor of online versions, The Wall Street Journal reports.

Physician compensation grew most for these 5 specialties
Physician compensation increased across the board from 2017 to 2018, with primary care physicians earning a 3.4 percent increase, specialty physicians earning a 4.4 percent increase and advanced practice providers earning 2.9 percent more, according to data from the Medical Group Management Association.

Tennessee hospital to lose Medicare contract
Jamestown (Tenn.) Regional Medical Center is facing financial troubles and is set to see its Medicare and Medicaid funding cut in June, according to The Tennessean.

From cleaners to the top exec, the average salary for 30 hospital jobs
Across the nation's more than 6,000 hospitals, chief executives made an average annual salary of $242,550, compared to phlebotomists, who made an average of $34,750 per year, according to Business Insider.

What the average employee made at 30 healthcare organizations
The U.S. requires companies to disclose the median compensation of their employees to shed light on the ratio between the salaries of typical workers and CEOs. Since the requirement was implemented, one thing became apparent: Not all healthcare employees are paid the same.

Massachusetts hospitals stockpile $1.6B in offshore accounts, nurses say
Sixteen hospitals and health systems in Massachusetts have more than $1.6 billion in the Cayman Islands and other tax havens, according to a report issued by the Massachusetts Nurses Association.

Ex-Mount Carmel physician charged with murder of 25 patients
A former physician at Columbus, Ohio-based Mount Carmel Health System, was charged June 5 in the deaths of 25 hospital patients, according to The Columbus Dispatch.