“Should we offer our employed surgeons an ownership position in the freestanding ASC joint venture we are developing?”

Health system executives have asked us this question for decades. The answer isn’t always obvious. Some even mistakenly believe it is illegal to allow employed physicians an invest-ment opportunity. But as more health systems recognize the need to create a more substantial ambu-latory surgery capability, and with a growing number of surgeons employed by health systems or under professional services agreements (PSAs), exploring this option is essential.

Many health systems try to apply a standard policy to all arrangements. Examples include:

But applying a standard policy to a complex situation is rarely successful. Rather, health system execu-tives should allow themselves flexibility to offer employed surgeons an ownership position in an ASC based on what is in health system’s best interest. Many strategic, financial, operational, and legal fac-tors should be considered.

Forward-looking health systems have been investing heavily in shifting cases to ASCs—in some cases strategically reducing inpatient revenue to better position themselves for the future. For many of these systems, including both independent and employed physicians in the ownership of their ASCs has be-come central to their ambulatory surgery strategy.
Table 1 presents common strategic considerations impacting the decision whether to offer ASC owner-ship to employed physicians. 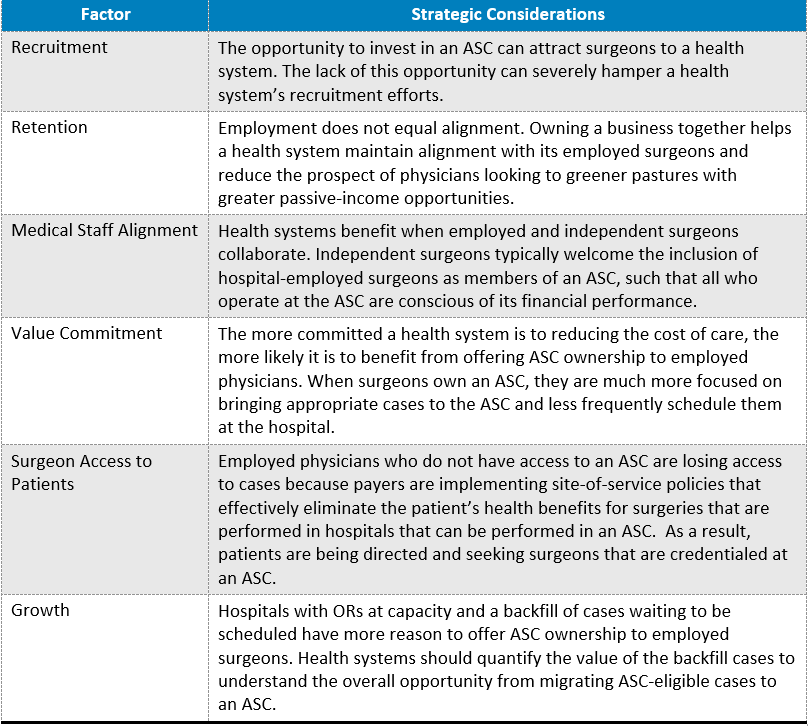 Surgeons sit near the end of the continuum of care for a surgical episode, which makes it easier to cal-culate their overall financial contribution to a health system. Most of a surgeon’s financial contribution can be calculated by summing the income and losses of the surgeon’s clinic, ancillary services (imag-ing, PT, etc.), ambulatory surgery, and hospital surgeries/admissions. Health system executives are of-ten surprised to learn the degree to which the financial performance across these various services fluc-tuates among surgeons of different specialties and subspecialties.

The average annual investment among hospitals that employ surgeons to ensure access and communi-ty benefit is approximately $320,000 per provider. But the investment varies substantially across spe-cialties and subspecialties. Figure 1 shows the median annual net investment per provider for clinic operations for a variety of surgical specialties.2

In contrast, hospitals frequently show a profit from surgeries and other ancillary services related to surgeries—many of which are commonly maintained within an independent surgical group’s practice. But just as the investment from clinic operations can vary substantially across specialties and by sur-geon, so can income from surgeries and ancillary services. Factors impacting an individual physician’s surgical and ancillary profitability include the physician’s volume, mix of inpatient versus outpatient surgeries, payer mix, cost efficiency, etc. Also, substantial variance occurs not only between specialties but also within a specialty and among physicians of the same subspecialty.

Figure 2 presents findings from an analysis of the financial contribution of the employed orthopedic surgeons at a health system by place of service, with ancillary services included as hospital income. At this health system, the annual average contribution for every orthopedic subspecialty is a loss at the clinic and a profit at the ASC and hospital. But the magnitude of the losses and profits varies substan-tially. The clinic losses are much less than the industry average for employed orthopedic surgeons, ranging from a low of $80,000 for general orthopedics to a high of approximately $380,000 for spine. Hand-and-wrist and foot-and-ankle surgeons generate the greatest ASC profits, but their minimal hos-pital profits result in an overall loss for hand and wrist and marginal profit of $5,000 for foot and ankle. Joint replacement and spine clearly provide the highest overall financial contribution to the health sys-tem but for this particular organization generate minimal ASC income.3

Based on this analysis, this health system could ill afford to offer ASC ownership to all its employed or-thopedic surgeons. Doing so would reduce the income the system receives from the ASC and relies on to make up for the clinic losses.

The decision to include or exclude employed physicians from ASC ownership can significantly impact the success and operations of the ASC due to the following:

ASCs are not considered a designated health service under the Stark law, and therefore, for the most part, Stark is inapplicable to ASCs. In contrast, the Medicare Anti-Kickback Statute does apply to ASCs. Federal regulations create an array of safe harbors protecting certain ASC structures.

However, it’s important to understand how the Medicare Anti-Kickback Statute works. While the safe harbors provide absolute protection to any venture that meets all of their conditions, an ASC is never required to meet a safe harbor. The benefit of meeting a safe harbor is that arrangements within a safe harbor cannot be prosecuted by the government. However, because of this, the safe harbors are designed to be incredibly narrow.

When an arrangement does not qualify for a safe harbor, its legality is determined solely by the partic-ipant’s intent. The Anti-Kickback Statute prohibits offering, paying, soliciting, or receiving any remu-neration if one reason for the payment is to influence referrals under a federal healthcare program. To analyze compliance with the Anti-Kickback Statute, one asks a very basic question: Is anyone paying, or seeking payment, for referrals?

While it is worth knowing the elements of a safe harbor, there is no reason to obsess about perfectly meeting every element. Generally speaking, the risk associated with permitting employed surgeons to invest in an ASC they will be actively using is very low.

Among the safe harbor requirements impacting the decision of whether to offer employed physicians ownership in an ASC is the so-called “one-third test.” This test has two parts.

The one-third test often prompts claims that an ASC may not allow investment by a surgeon who doesn’t meet both prongs of the test. Sometimes an ASC will use the test as a tool to force physicians who are not bringing a large share of their cases to the ASC to divest their ownership. While sound business practice and antikickback risk management both make it a good idea to limit investment to surgeons who are very active at an ASC, there is absolutely no legal requirement that an ASC pass the one-third test.

While it is not necessary to apply the one-third test, there can be benefits to using it as a means of en-suring all physician investors—both employed and independent—remain active. When individuals are taking money out of the center without actively aiding its economic performance, the ASC quickly can become unstable. The professionals who are bringing cases to the center may choose to leave if they feel passive owners are profiting from the active investors’ work. Therefore, while the one-third test may not be a regulatory necessity, it can be an important tool for ensuring the viability of a center.

So, should you offer your employed surgeons an ownership position in your freestanding ASC joint ven-ture? What may feel like the right strategic response may not be backed up by the financial impact. Take the time to evaluate and weigh the strategic, financial, and operational implications before de-ciding. Keep the following concepts in mind:

1. A financial arrangement can often be engineered to support a strategic objective. For example, the financial impact to the health system of offering ownership in an ASC to surgeons under an employment or PSA model is driven by the compensation paid per WRVU for professional ser-vices and the amount of equity offered in the ASC. By lowering the WRVU rate (and thus reduc-ing/eliminating the clinic losses), a health system can more easily justify offering surgeons eq-uity in an ASC.

2. Notwithstanding the previous statement, never confuse physician compensation with equity dis-tributions. From a fair market value perspective, they have nothing to do with one another. A health-system-employed physician’s ownership or lack of ownership in an ASC should have no bearing on the amount or method by which the physician is paid for clinical services provided to the health system.

3. Exiting or not renewing employment agreements is much easier for physicians than leaving a business in which they are an owner. Restrictive covenants of an ASC’s operating agreement and the inability to sell their units at a favorable rate can provide substantial deterrents to phy-sicians from leaving an ASC.

1 Based on ECG’s 2020 Medical Group Performance Survey, which is based on 2019 data. Investment per provider for many specialtiesg increased substantially in the 2021 survey because of the pandemic.

2 This investment is often necessary because, compared to independent physicians, hospital-employed surgeons frequently see more patients with low reimbursement, sources of ancillary revenue are stripped from the clinic, and overhead costs are higher at hospital-operated clinics.

3 This case study is intended to illustrate the variance in the financial impact among subspecialties and should not be con-sidered typical. For example, many joint replacement and spine surgeons contribute greatly to ASC profitability.

4 Input for the legal section of this article was provided by David Glaser of Fredrikson & Byron.