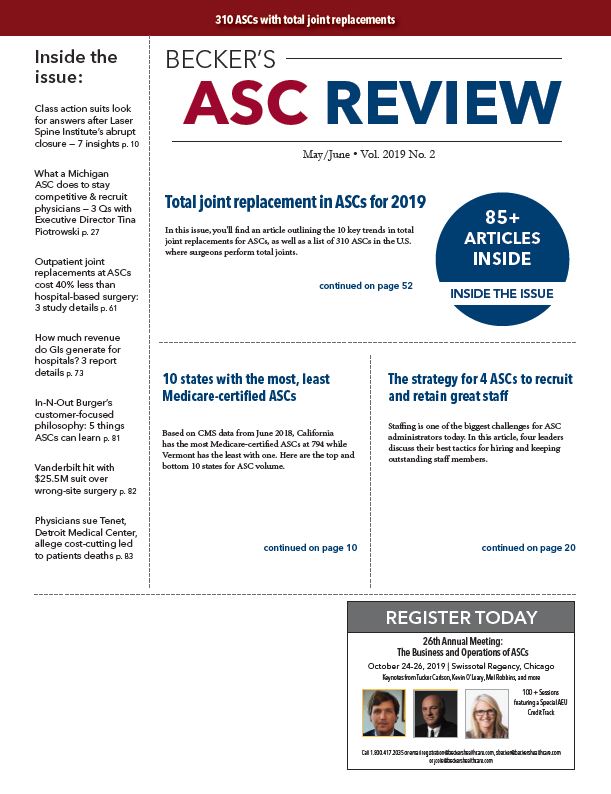 The strategy for 4 ASCs to recruit and retain great staff
Four ASC administrative leaders discuss how they are solving their biggest staffing challenge: recruitment and retention.

10 states with the most Medicarecertified ASCs | 2019
California has more Medicare-certified ASCs than any other state, according to the Ambulatory Surgery Center Association. It is the third largest state in the U.S., based on square mileage.

10 states with the least Medicarecertified ASCs | 2019
Vermont is home to even fewer Medicare-certified ASCs than Washington, D.C, which has three, according to the Ambulatory Surgery Center Association.

The strategy for 4 ASCs to recruit and retain a great staff
Four ASC administrative leaders discuss how they are solving their biggest staffing challenge: recruitment and retention.

How ASCs can compete with hospitals for top talent — 4 expert insights
ASCs should be proactive and sell their strengths to attract the best candidates, according to Liz Bickley, senior vice president of healthcare client services for Cielo, a recruitment process outsourcing company.

How total joints propelled an Ohio-based ASC’s strategy for growth + a bigger location
The Orthopaedic Surgery Center in Boardman, Ohio, is a 100 percent physician-owned facility focused on orthopedics. Here, Administrator Taylor Cera discusses the group's growth and opening a new ASC in 2019.

Emerging spine technologies include smart technologies, robotics & nano-engineering: Q&A with Dr. Frank Shen
Frank Shen, MD, division head for spine surgery at the University of Virginia Health System's department of orthopedic surgery in Charlottesville, discusses the big technology trends in spine surgery that will have an impact on the future.

6 trends and observations in ASC M&A
There are several players in the outpatient surgery space interested in ASCs.

Large payers like UnitedHealthcare could buy PE investments in 2nd wave — 4 insights
As the first round of private equity investors prepare to sell, JD Supra examined what the second wave of physician practice management practice buyers could look like.

How 3 ASC administrators deal with the rise in high deductible plans
As more people become covered under high deductible health plans, patients are responsible for paying a larger portion of their medical bill.

Physician group adds $2.8M ASC to 7-practice portfolio — 1 year ago 'we weren't an entity'
After suing for independence from Atrium Health in 2018, Tryon Medical Partners has opened a $2.8 million gastroenterology facility in Charlotte, N.C., the Charlotte Business Journal reports.

Neurosurgeon-generated revenue for hospitals jumps 40.5% in 3 years to $3.4M
Physicians and surgeons generate millions of dollars in revenue for affiliated hospitals each year, with neurosurgeons ranking No. 3 among the top revenue generators, according to a new survey from Merritt Hawkins and AMN Healthcare.

Colonoscopy the gold standard in US, despite alternatives — 7 insights
Medscape reviewed current colorectal cancer screening tests options as well as research surrounding them to quantify which is the most effective.

New York hospital settles with Cerner over billing problems: 5 things to know
Glens Falls (N.Y.) Hospital has reached a settlement with Cerner over losses it sustained when Cerner's billing system did not work, according to The Post-Star.

Texas hospitals record most cyberattacks in US
Since 2014, more than 1.4 million Texans have had their health records stolen, making hospitals in the state most at-risk for cyberattacks, according to data from HHS and cited by Texas Public Radio.

CEO of Connecticut hospital defends $1M salary: ‘People don’t understand what it actually takes to get into this role’
Bristol (Conn.) Hospital CEO Kurt Barwis and several hospital board members discussed the institution's robust C-suite compensation packages in light of a state tax revenue proposal, according to HartfordBusiness.com.