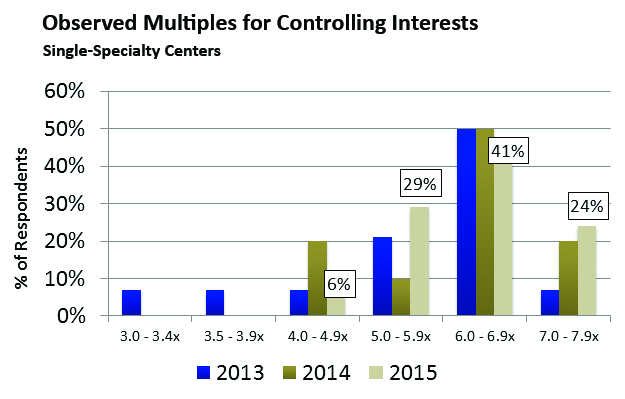 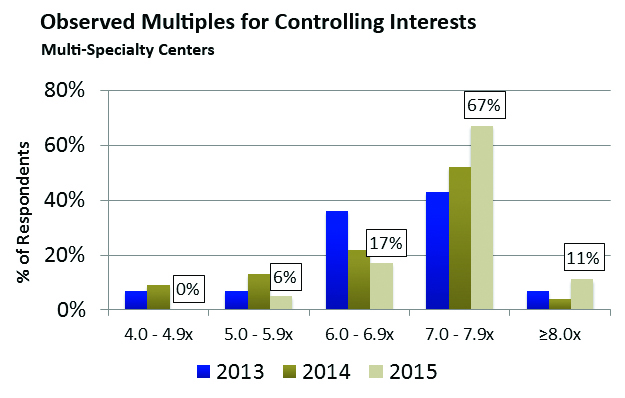 Multiples for non-controlling interests are significantly lower than their controlling interest counterparts, as a buyer is willing to pay less for an interest that lacks certain prerogatives of control (i.e., conversely, buyers pay premiums for interests which carry with them control rights). As set forth in the following graph, single specialty minority interest multiples generally range between 4.0 and 4.9 times, with the increase predominantly coming from 3.5 to 3.9 times in the prior survey. 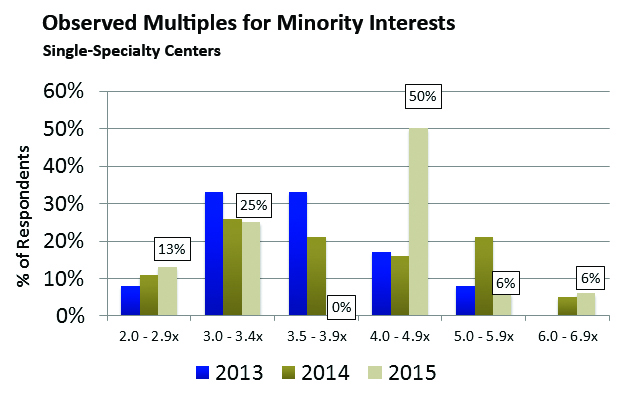 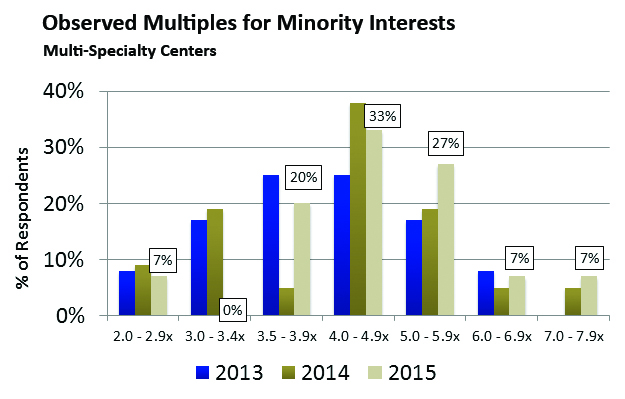 "While we observe a diminishing growth rate for new ASCs and continued pricing pressures, we continue to see robust transactional activity in a maturing industry, which we note is still largely unconsolidated. According to a recent article published by Medical Research Consultants, independent ASCs capture approximately $24 billion, roughly 63 percent of the market share.1 In the past several years, we have witnessed some sizable consolidation activity," says Todd Mello, ASA, CVA, MBA, Partner and Co-Founder of HealthCare Appraisers:

"The increased competition for ASCs (i.e., Mello notes that 60 percent of respondents reported increasing acquisition activity and 45 percent reported increasing competition for deals) continues to drive prices up, and recent large transactions (e.g. Symbion) suggest multiples paid of 10 times or more for companies with a large presence in the space. Considering that one can purchase a multispe¬cialty center at a multiple of 7 to 8 times EBITDA, these transactions still appear to be accretive to the acquirer."

Hospitals have continued to increase their prowess within the ASC industry. Tenet's combination with United Surgical Partners to become the largest provider of ambulatory surgery in the United States is one primary example. Additional health systems, for-profit and not-for-profit, also continue to look for opportunities within the ASC sector and compete with other non-hospital buyers.

"Hospitals' continuing efforts to acquire physician practices and employ physicians is also taking its toll on the industry," Mr. Mello notes. "According to MGMA's 2014 Physician Compensation and Production Survey (i.e., based on 2013 data), over 63 percent of responding physician practices are owned by hospitals or integrated delivery systems, up from 34 percent in 2008. In addition, 67.5 percent of responding internal medicine physicians are hospital-owned, up from approximately 51 percent in 2009. Furthermore, according to the 2014 Review of Physician and Advanced Practitioner Recruiting Incentives, which examines over 3,000 permanent physician recruiting assignments that Merritt Hawkins/AMN Healthcare had ongoing or were engaged to conduct between April 1, 2013 and March 31, 2014, 64 percent of newly hired physicians are employed by hospitals, up from 11 percent in 2004. Though lagging behind, most specialists are on the same path towards employment. According to MGMA, over 51 percent of orthopedic surgery respondents are hospital owned, up from 31 percent in 2009. As, health systems continue to acquire physician practices in part in preparation for risk-based contracting arising from healthcare reform, the impact to independent surgeons and ASCs is potentially significant," notes Mr. Mello.

1. Primary care physicians who are employed by a hospital or health system are strongly encouraged to refer to specialists who are also employed, thus possibly reducing referrals to unaffiliated surgeons.
2. Surgeons who become employed are oftentimes precluded from doing cases in a free-standing ASC to the extent the ASC is not affiliated with the hospital. Accordingly, free-standing ASCs are finding it harder and harder to attract new surgeons to maintain the long-term viability of their ASCs.
3. Free-standing ASCs are oftentimes acquired and cease to operate on a free-standing basis, either through outright closure or conversion to hospital outpatient departments.

"If you are competing against other managers/buy¬ers and charge a higher percentage of net revenue in management fees, you may be disadvantaged," says Mr. Mello. "Additionally, ASC owners often want to lower the percentage over time. The hardest work is generally in the first couple of years — that's when the company spends the most resources to make sure the ASC per¬forms well. Then the ASC companies' profit margins typically go up. But once the ASC runs smoothly they typically don't need as much support from the manage¬ment company."

The trend within the inpatient setting to tie compensation, in part, to the achievement of pre-established performance and quality metrics, which is consistent with the direction of healthcare reform, is still lagging within the ASC industry. Only 15 percent of respondents reported that some portion of their management fee is "at risk."

"While there is still much uncertainty surrounding the future of healthcare delivery and reimbursement, I think within the next several years we will see more pressure to introduce quality and performance-based metrics into ASC management fees," noted Mr. Mello. "As ASC industry participants continue to evaluate ways to align with hospitals for the delivery of cost-effective, coordinated inpatient and outpatient care in the wake of healthcare reform, I believe it's only inevitable."